“Abstraction is real, probably more real than nature. I prefer to see with closed eyes.”

How can abstraction be more real than nature? At the most elemental level nature, as well as all of reality, is composed of pure energy. This energy field is about as abstract as you can get. I suspect Albers was at least alluding to this view of reality – he was an important member of the Bauhaus school in Germany around the time Heisenberg was publishing his influential work on quantum mechanics where this view of reality and energy was being promoted. It isn’t hard to believe their paths crossed, at least their idea paths. Many threads of 20th century thought have been affected by this fundamental work in theoretical physics. Numerous authors of a more metaphysical bent have made reference to this as well (Capra, Zukov, Chopra, etc.).

But this is seems more about obscure philosophical ruminations than something an artist would care about (of course, I do have a degree in philosophy, so I am wired to think about such things…).

I’m planning on talking more about abstraction vs realism in future postings (bear with me!). For now, let me just make an observation that has an interesting historical association. My initial visual art form was photography. After several years I started painting. I found the literalness of photography limiting, but I struggled initially as a painter because I felt somehow bound by my photography background to see things literally. I’m sure every artist out there has gone through the experience of wanting to go beyond their current or past art perspective but not being able to do it. It’s like the soul is willing but the body is not (why do I keep painting inside the lines when I really want to paint outside them???).

I didn’t want to just paint what I could photograph – that would just be a bad photograph, in my opinion. Historically, in the 19th century, the rise of photography presented painters in general with a dilemma. Prior to that they had largely been the keepers of the representational keys to the kingdom. Now they had to find a way to distinguish their work from a photograph, which ultimately provided a better (or at least more literal) rendition of “reality”. Ironically enough, the literalness of photography contributed to the rise of abstraction in painting. Similar to how the literalness of photography served as the impetus in my own life to seek a more abstract expression in my art.

I think many artists in widely diverse mediums tend to move from representational to less representational work. I wonder why that is so common? What does it say about us as individuals? How does it parallel the historical trend in art over the last 200 years? Lots to think about…

“The holy grail is to spend less time making the picture than it takes people to look at it.”

I once read that the average viewer at an art show spends something on the order of 2-3 seconds looking at each piece. So the above quote presents quite an imposing standard to the artist. The art I personally enjoy is that which I can return to time and again and enjoy with each visit. This doesn’t necessarily mean that the work contains a lot of complexity so that you are literally seeing new elements that you just couldn’t absorb in one viewing. A simpler image could generate a different and new feeling in you at different times, or it make evoke a consistent feeling that you want to have again and again. Images with some mystery to them seem to be good candidates, as they engage the viewer more forcefully

I won’t tell you how long it took me to make this image – I don’t want to put any pressure on you… Enjoy for as long as you’d like.

“Dance is the only art of which we ourselves are the stuff of which it is made.”

Many, many years ago, I studied dance for a while, mostly ballet. I spent some time sleeping on the floor in friend’s of friend’s apartments in NY, with just enough money for daily lessons at NYC Ballet school or the ABT. My favorite day was Wednesday, when I could get into the museums for free. Waiting for me back home was a job as a computer programmer that I wasn’t at all interested in.

It turns out I wasn’t very good as a dancer, but I loved the controlled grace and power of dance and, even after I put an end to my own efforts, I continued to attend dance concerts when possible. Now, years later and in a very different stage of my artistic “career” I still find the human figure in motion a rich subject of inquiry. Occasionally I go to a figure drawing class, but the absence of movement always seems like a missing dimension – of course, that probably speaks more to the lack of my drawing skills as I’ve seen many drawings of figures that seem to move in spite of the static pose! 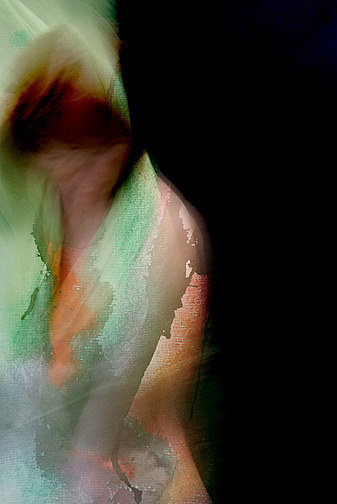 “The aim of every artist is to arrest motion, which is life, by artificial means and hold it fixed so that a hundred years later, when a stranger looks at it, it moves again since it is life.”

I love this quote, which defines motion as life and the artist’s task to arrest it so it can be set forth again in the viewer’s eye. The dynamic tension between movement and stillness holds deep meaning for me. All of life exists in the infinitesimal gap between the two. The idea that everything exists simultaneously in such a timeless moment is echoed in areas as diverse as quantum physics, Tolle’s The Power of Now, Borges’ short story The Aleph, Zen koans and the work of M.C. Escher. 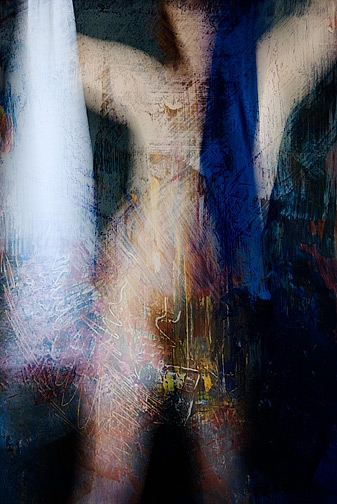 Abstract figures have such expression – this one reminds me of a tree with strong branches and roots. The cloth is somehow draped over the limbs, but out of the scene so that is a little mysterious. There’s movement and solidity going on here at the same time.

There’s so much experimentation involved in creating pieces like this. When I photograph the models, they’re moving and I typically move the camera at the same time. This creates interesting and unexpected figures with an ethereal quality. I then go through my portfolio of abstract paintings (this one was acrylic with lots of scratching on the surface) and play with combining the figure and the paintings. Finding the right combination of shapes, textures, color, etc. takes some time and is really fun. I’m usually surprised at how they combine and when I find a combination I like, it’s a real aha! moment. 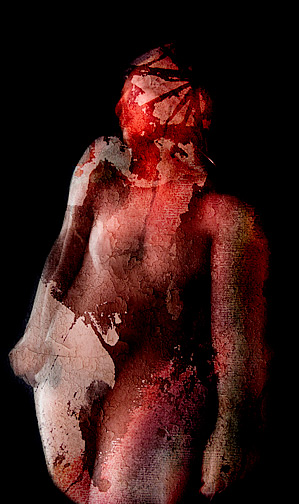 When I created this image (a combination of a figurative photograph, some crackled paint texture and 2 abstract ink and watercolor paintings) it seemed a little disturbing and I hesitated to post it. My first impression was of the figure as bound and constrained in some fundamental way. My wife saw it an immediately said “stroke” – the limp arm, the tendrils radiating in the head, the crackled skin… I realized that this image had emerged from my subconscious with the intention.

I’ve started reading the book “My Stroke of Insight” by Jill Bolte Taylor, the story of a brain scientist who had a massive stroke which left her left brain cognitive functions inoperative. Given her background she knew what was happening and could observe it with insight the rest of us would not possess. While I haven’t finished the book, my understanding is that she experienced a state of bliss unknown to her before as a result of having only her right brain functions to rely on. The right brain gives us our sense of being one with the universe, among other things. This experience led her to something of a spiritual awakening that is the thrust of her book. I also spent some time yesterday with my sister, who suffered a stroke several years ago and continues to deal with the residual effects of that in her life.

So somehow this image surfaced today, another sign that our thoughts, our art and our lives are deeply intertwined in a way that surprises us, even after all these years… 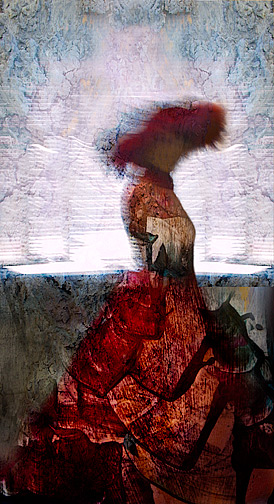 As she prepares to exit the scene, a quick glance at us over the shoulder, her head a blur, her gown frozen in time, making for an improbable pairing. She seems to have a secret we’d like her to reveal before she departs. Her presence is fleeting, our opportunity brief. Will she speak to us?

This piece is another in a series of work that combines my figurative photography with abstract paintings that I’ve done. There’s also a touch of rock texture I’ve added here and there. This one looks a little like some Impressionist painter, down to the era of the attire…

There’s something Victorian about the bearing of this model – perhaps it’s the hat, the shawl, the attitude, the position of her hands…

The Victorian era had a fascination with mechanical devices, the industrial revolution spawning interest in anything with gears. I superimposed a nautilus shell, nature’s own gear wheel, over the figure to depict this relationship. Is her inner life turning on the teeth of these gears?

I wonder what she is pondering in her introspective pose?

Hands are one of the most expressive parts of the human anatomy. Over the years, I’ve photographed them many times. Painters love to draw them. Sculptors shape them. Each digit has a role, as does the palm, the veins on the back, the gentle slope and turn of the wrist.

The hands in this image have a short story to tell. What are they doing? Are they moving, or holding something? Are they letting go, or trying to grasp? Is there an embrace hidden in the image? What do they say to you?

There’s a photograph in this image of a figure, along with a painting, a layer of pure texture and the Chinese characters…

Another in my series of work combining photographs of dancers in motion with paintings. The background came from a mixed media painting I had completed a long time ago (acrylics, pastels, sumi ink, modeling paste) – I’m experimenting with integrating dancers with abstract paintings to emphasize the dynamic of motion that exists in the human form and in the form of paint on paper.

There are so many wonderful themes to explore in art – movement, light, texture, shape, color, line, etc. It’s an interesting choice to decide which to include (of course, most are there in every piece, but what to focus on?). Is the piece stronger if the focus among these is narrower? Or is it just more difficult to bring them all together, and thus less likely to be successful? Sometimes complexity is interesting in and of itself – simplicity has it’s own, but different, appeal. I know I’ve created more unsuccessful pieces by attempting to include too much than I have creating pieces that I thought too simple. The challenge with the latter group is more often not feeling like they are done, and then turning them into the former group, ie too complicated.