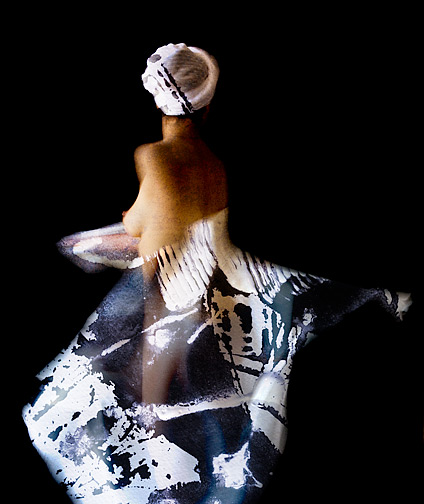 “People in motion are wonderful to photograph. It means catching the right moment… when one thing changes into something else.”

Andre Kertesz was a Hungarian photographer who pioneered photojournalism in the early 20th century but whose work also intersected in various ways with some of the modernist painters in Paris in the 20s and 30s who I am currently reading about. He became friends with and took portraits of many of these painters, including Mondrian, Chagall and Calder. He did an interesting series of nudes with two women posed in a house of mirrors called Distortion – in some of them you can only see random limbs. Maybe he would have found this series I am doing of interest (how’s that for artistic hubris?).

I’ve been creating a set of small abstract paintings using Sumi ink and gesso and then integrating them into recent photographs from a modeling session. One thing is changing into something else, but which is the thing changing?

I like mixing the spontaneity that this type of photography demands with the equally spontaneous techniques I use when doing these small paintings – pouring, splattering, scraping, stamping, etc. Then I play with different combinations, looking for those that complement each other.